Under the reign of the Lord of the Makino Clan, Nagaoka flourished as a castle town for 250 years from 1618.

In 1868, the Boshin Civil War broke out across Japan. Nagaoka was defeated and reduced to rubble. After the fall of Nagaoka Castle, there was no food and little hope of survival.

In 1870, the Mineyama Domain, an allied province, sent a relief package of one hundred sacks (6 tons) of rice to the war-devastated Nagaoka Domain. However, the rice was not distributed to the starving people. 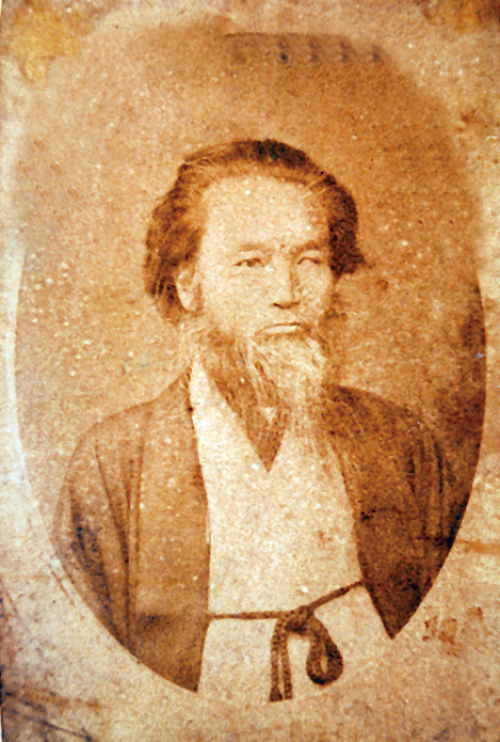 Torasaburo Kobayashi, the Grand Councilor, insisted that the rice be sold and that the funds raised be used to establish a school in order to foster young people, who would all be responsible for the future.

Against hostile opposition, Kobayashi persuaded the clansmen to sell the rice to raise funds to establish a school named Kokkan Gakkô.

Many of the clansmen insisted that the rice be distributed amongst the clan. Torasaburo Kobayashi convinced them saying, “Whether a country rises or falls, whether a town flourishes or decays, the answer lies in every instance with the people. Don’t think only of present-day problems. Think hard about the future. We need a school to educate children, because we are starving now.”

This historic incident was widely introduced by the drama entitled “Kome Hyappyô (One Hundred Sacks of Rice)” written by a well-known Japanese playwright, Yuzo Yamamoto (1887-1974).

The play was translated into English and Spanish. Many people were deeply moved by Kobayashi’s philosophy of educational commitment. With the concept stressing that “city development is dependent on nurturing people,” the Spirit of One Hundred Sacks of Rice has drawn people’s attention both at home and abroad.

The play was on stage at the Kabukiza Theater in Tokyo and at the Municipal Auditorium in Nagaoka. The play, entitled “Cien Sacos de Arroz” in Spanish, was also performed by students of the National Theater Drama School in Honduras in 2003. Encouraged by the story of One Hundred Sacks of Rice, a movement to establish schools named “Kome Hyappyô “ arose in Honduras. Between 2004 and 2016, 100 Kome Hyappyô schools were built in Honduras.

The play was even translated from English to Bengali. In 2016, a theatrical company was formed in Bangladesh to perform this play, which was on stage 48 times in more than 10 cities in Bangladesh, drawing a total of nearly 24,000 spectators.

In later days, many graduates from Kokkan Gakkô played leading roles in developing our city and nation. Citizens of Nagaoka continue to take pride in and draw courage from the philosophical teaching known as “The Spirit of Kome Hyappyô,” believing that education is a vital source for city development.